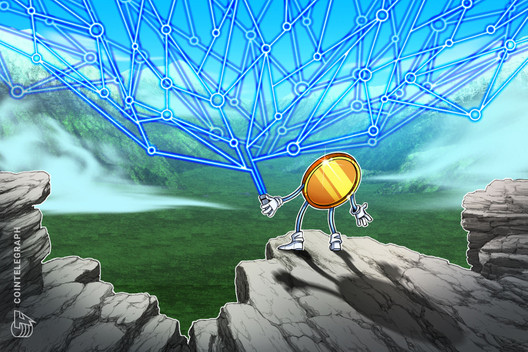 Has the meteoric rise of DeFi tech been brewing behind the scenes for quite some time now, or is it just a fluke?

It’s no secret that 2020 has been the year of decentralized finance when it comes to the crypto world. In this regard, a number of DeFi tokens have enjoyed value surges recently, leading many experts to believe that the future looks bright for this niche sector. Global DeFi markets are continuing to scale up to all-time highs in terms of total value locked, reaching a peak of $4.75 billion on August 11.

As a result of these aforementioned developments, mainstream tech players are looking to help financial institutions capitalize on the ongoing DeFi hype. For example, Nitin Gaur, director of IBM financial services and digital assets previously told Cointelegraph that it is of utmost importance that traditional banks start to recognize and embrace the value propositions put forth by DeFi tech, otherwise, their existing business models could soon become outdated.

According to Jack Tao, CEO of crypto exchange Phemex, a host of factors have contributed to the recent mainstream attention that the DeFi space has been attracting. He told Cointelegraph that with each passing day, an increasing number of DeFi tokens are being supported by prominent exchanges all over the globe. Not only that, this nascent technology has also been able to capture the imagination of masses due to its ability to deliver new applications, implementations and decentralized projects in a real, tangible fashion.

Tao also pointed out that a large chunk of investors all over the globe have also helped usher DeFi into the mainstream because of their efforts to cash in on the ongoing hype — albeit primarily in an effort to maximize their profits within the shortest time frame possible.

Similarly, Charles Read, an angel investor previously involved with the development of projects such as DIA Data and the Orion Protocol, believes three key drivers have spurred the DeFi narrative in recent months: yield farming, liquidity mining and synthetic assets. In his view, a combination of one or more of the aforementioned elements can allow developers to build new systems that are not only novel but also have mainstream deployment potential:

“There are now aggregator exchanges like ParaSwap and 1inch that allow you to access liquidity from all of the DEX [decentralized exchange] markets through just your web wallet. What this means is that the more crypto savvy crowd is opting to use DEXs more than ever before.”

Read also pointed out that owing to rising DEX volumes, the crypto market will continue to witness various centralized exchanges scramble to retain their existing trade volumes. As a result, an increasing number of traditional exchanges will continue to back other DeFi projects, thereby leading older projects to pivot toward the domain of decentralized finance. He added: “It’s more of a marketing game than a product game.” 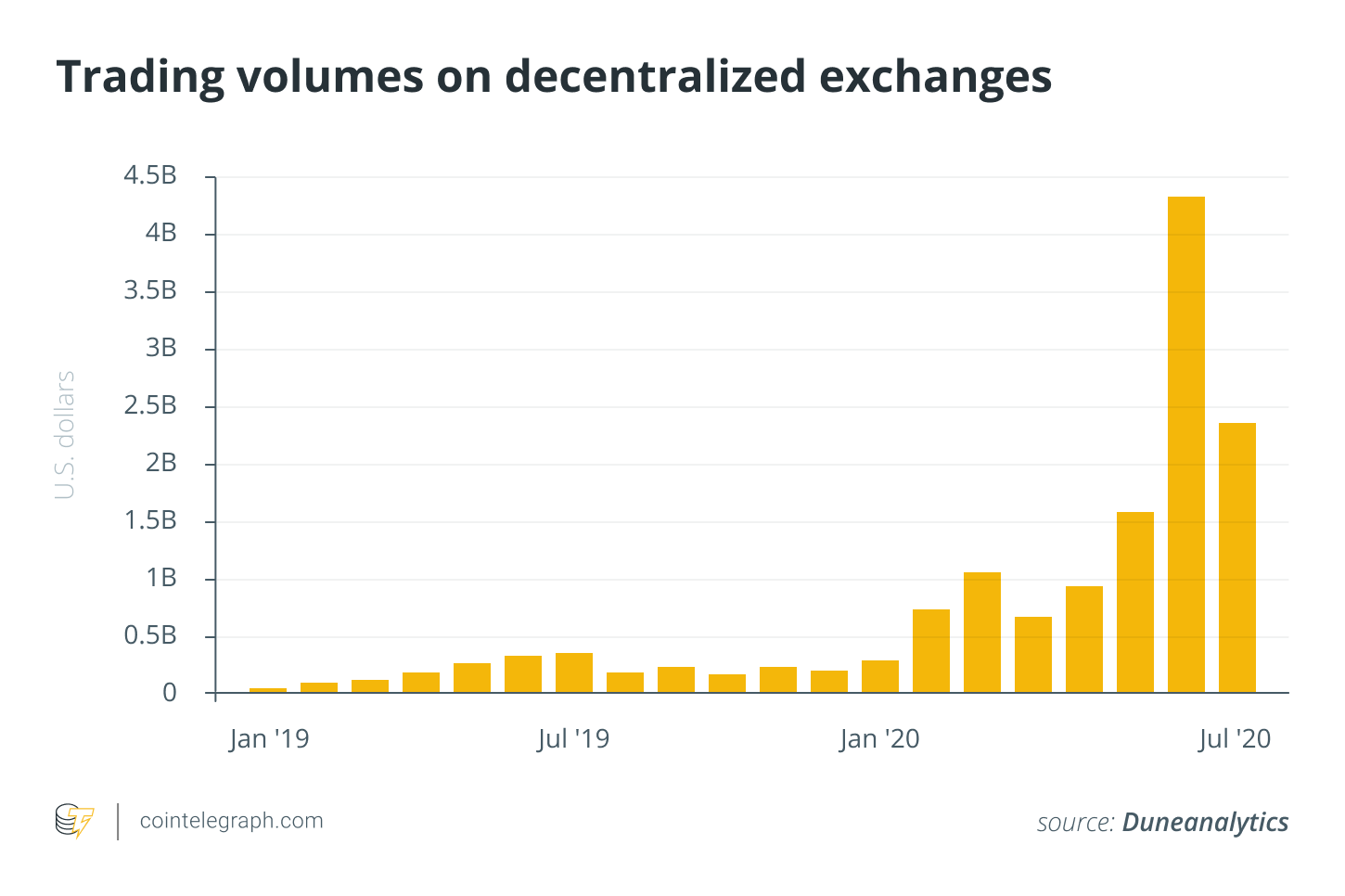 A somewhat similar outlook is also shared by Sandeep Nailwal, chief operating officer and co-founder of a blockchain scalability platform Matic, who believes that projects like Compound have set a precedent of success for the governance token model, which is now being replicated by every DeFi project. He added:

“The use of Yield Farming, a way to incentivize users in Protocol Tokens for participating in the protocol is becoming increasingly popular. Right now, most of these tokens are banking on one central utility, Governance of the protocol. It remains to be seen whether the high valuations these tokens are commanding currently in the market are actually worth it.”

A pertinent question worth exploring in relation to this ongoing DeFi boom is: Are the popular tokens actually backed up by platforms offering products that merit a rise in demand for the coins? Providing his insights on the subject, ‎Kosala Hemachandra, founder of MyEtherWallet, told Cointelegraph that he believes it to be the case:

“Unlike the 2017 ICO craze, the rise in demand around DeFi is actually backed by users, along with tools and services that facilitate growth and help us take decentralized finance to the next level. For the first time, we can now exchange, borrow and lend without involving a single centralized entity.”

Also, it’s worth noting that even before the recent DeFi mania kicked in, some projects like Synethix, Thorchain and Kyber network had been quietly accruing value all throughout 2020, showcasing a natural uptrend that was supported by trading volumes. In this regard, Read opined that the actual worth of many tokens may become highly distorted due to high volatility. Additionally, he does believe that oracle platforms deserve every bit of their meteoric rise since accurate price feeds are essential when it comes to offering safe DeFi instruments like borrowing/lending to the masses:

“If you do not have accurate price feeds, or you aren’t pulling prices from multiple sources, it is easy to cause liquidations. […] This means less risk and more accuracy when using financial tools… and allowing the community to vote on the quality of data with a governance token is very useful.”

However, Nailwal is skeptical of the aforementioned assertions and believes that as things stand, markets and revenues are too small to justify high valuations, alluding to the fact that the ongoing boom could be, in large part, due to incessant market speculation and fear of missing out.

Is the DeFi token distribution scenario a worry?

As per an all-new analytical study released by Simone Conti, co-founder of DeFi Italy and vice president at Eidoo, the overall token supply (99%) for most DeFi projects are being held by the top 500 addresses operating within the space. Not only that, it’s clear that the top five addresses for the vast majority of DeFi projects hold over 40% of total supplies, Bancor being the only anomaly. 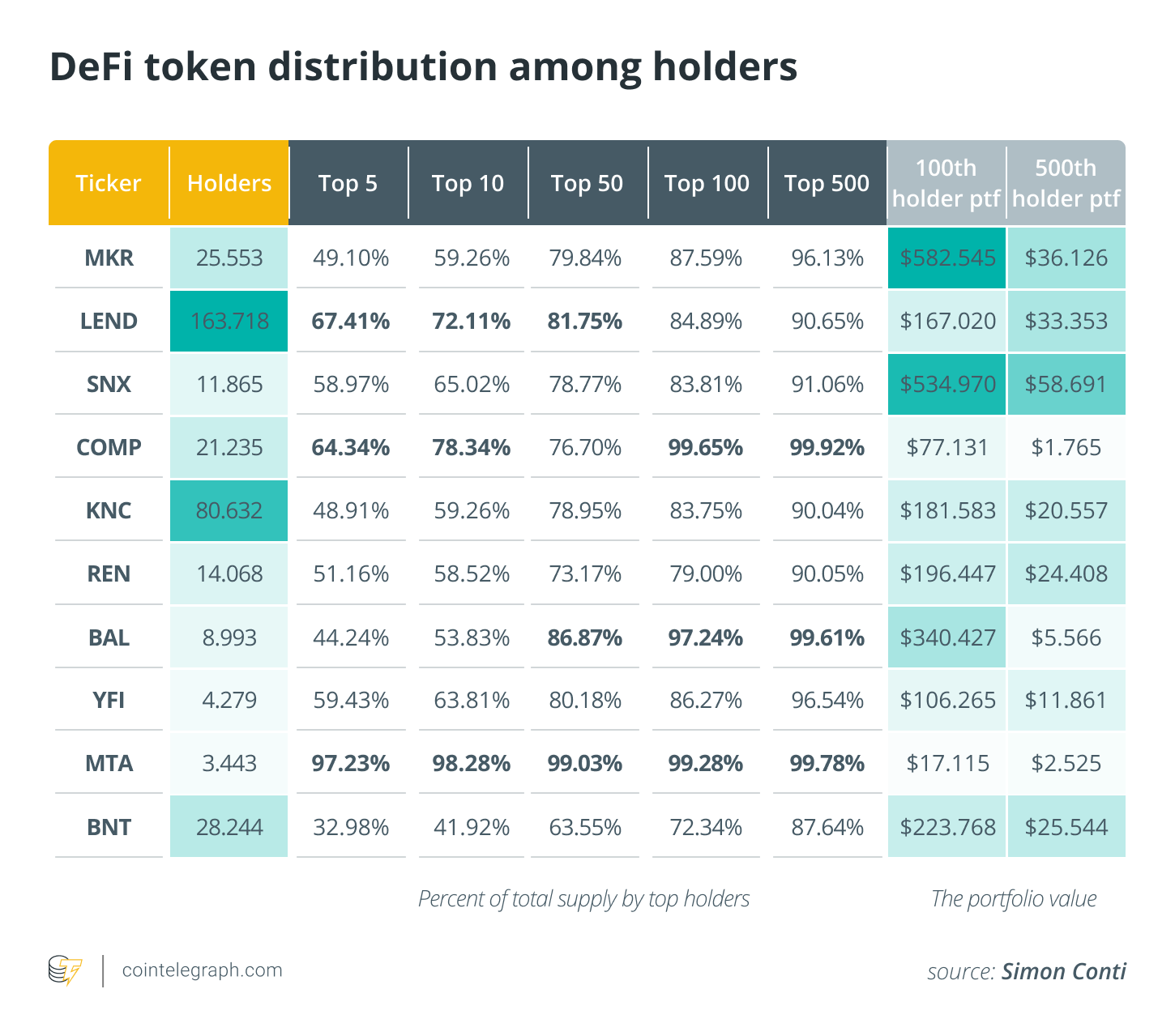 The problem with concentration in DeFi tech is that governance tokens are designed to hold voting power, and if the top owners are in possession of large volumes of tokens, they basically hold an overwhelming majority of voting power. When it comes to platforms like Compound, users are paid tokens over a certain period of time for using the platform. Thus, given the fact that the platform is a newcomer, most of the initial supply is held by venture investors and therefore it might take some time before these projects reach a certain level of balance.

Grant Fondo, co-chair of Goodwin Procter’s Digital Currency and Blockchain Technology law firm, told Cointelegrap that the United States Securities and Exchange Commision, alongside other financial regulators, tend to get concerned when a few entities control a particular platform or its associated network:

“The project’s assertions otherwise will not impact the regulators’ independent assessment. This concern will be heightened if any of those holders are responsible for significant price swings or the project’s direction, or if there is any fraud associated with the network.”

Lastly, Tao opined that the aforementioned issue is a common one that afflicts most cryptocurrencies, further emphasizing that instead of simply fretting about the problem, other questions should be asked: “Who holds the majority of these tokens? Do they have the ability to easily manipulate prices? Would a more even distribution of DeFi tokens be more beneficial to the project as a whole?”

Even though it’s easy to compare the ongoing DeFi boom to the ICO craze of 2017, individuals like Ryan Watkins, lead researcher for Messari, noted that such comparisons are unfair and do not do DeFi tech any justice. He pointed out that back in 2017, a number of initial coin offerings were able to draw in billions in investments without delivering a working product. However, when it comes to DeFi, most projects already have live products.

Also, Watkins is of the firm belief that despite the ongoing boom, the DeFi space is still relatively small and still has significant room to expand. Not only that, he also argued the growth of this space will most likely continue thanks to a reallocation of capital from various “useless first-gen cryptocurrencies, ghost-town ‘ETH killers’ and dead projects.”

Worth The Talk? Weighing up DeFi Products with the Token Price Craze originally appeared on CoinTelegraph.com