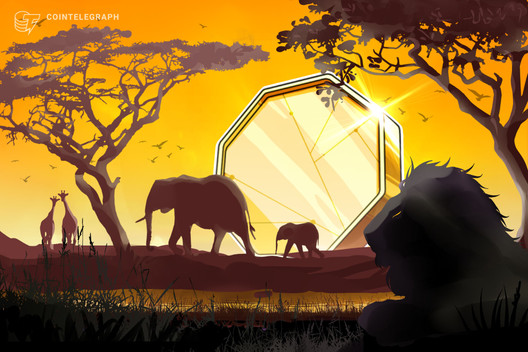 The popularity of crypto is on the rise in Africa, according to the CEO of one of the continent’s up and coming exchanges.

Crypto usage and trading has made its way over to Africa, gaining prevalence all over the continent, according to Chris Maurice, CEO of Yellow Card — a crypto exchange based in Lagos, Nigeria.

“In terms of the crypto scene and everything, things are growing very rapidly, really across the continent, but specifically in Nigeria, South Africa, Ghana, and Kenya,” Maurice told Cointelegraph in an interview.

With the four mentioned countries leading the crypto charge, Maurice added, “At this point, it’s just a matter of time before it continues to expand outward to the rest of the continent.”

Crypto usage in Africa is not represented accurately on paper

“The majority of it is not running through formal exchanges,” Maurice said of crypto asset volume. “It’s running through either WhatsApp, or Telegram, or informal OTC,” he mentioned, noting a few examples of other crypto usage avenues seen across the continent.

“The actual volume in Africa, I would estimate that it’s at least five to eight times higher than any actual volume number that you can find, just based on the amount of money that moves through these dark pools, essentially, through these Telegram and WhatsApp groups.”

“I’ve heard estimates that Nigeria and South Africa are both in the top five in terms of crypto users per capita,” Maurice said. “I’ve seen estimates as high as 10% of people in South Africa own, or have at some point owned Bitcoin,” he added. Recent Cointelegraph reporting confirms high crypto ownership and usage numbers across the region.

Pulling on his experience with the Yellow Card exchange, as well as his involvement with crypto participation across the continent, Maurice noted the data as logical. “In Nigeria and South Africa especially, it’s very unique in that pretty much anyone you talk to has at least some base level of understanding of Bitcoin,” he said, comparing the scene to that of the United States.

Crypto usage is logical for the region

Crypto usage poses a logical option for people of the region, Maurice explained. As a global digital asset run by the people away from government control, Bitcoin holds potential for fast transactions and self-sovereign money storage.

Maurice explained Bitcoin’s aspects as attractive to people in Africa, given difficulties associated with accessing similar, more traditional options. He also mentioned crypto as an alternate source of income for residents of the continent.

African residents began gaining interest in crypto roughly between 2014 and 2015, with the industry seeing major public traction by 2017, Maurice said.

A massive year for the cryptocurrency industry, 2017 also yielded crypto-related media headlines from Asia, North America and Europe. The industry took its place in the mainstream spotlight as Bitcoin rose dramatically in price amid speculation and hype. The whole global movement facilitated education around the industry, Maurice said.

“Everybody that I’ve met in Africa is very resourceful,” he explained. “When they see an opportunity like that, they’re interested — they want to learn more.”

As a global asset class by nature, crypto has grown substantially since Bitcoin’s 2009 launch, presenting itself as a solution to a number of problems, ranging from an inflation solution in Venezuela, to a financial asset class in North America.